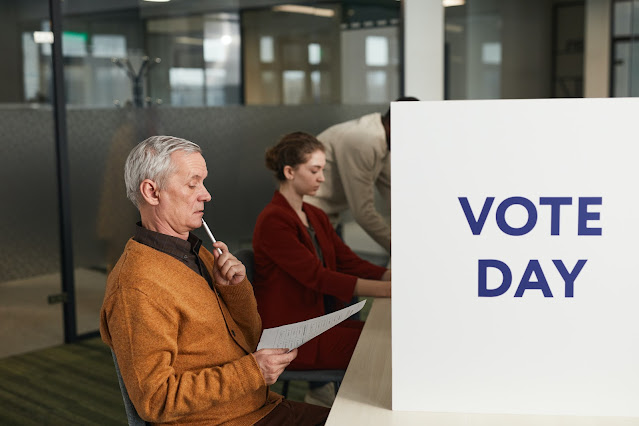 On November 8, 2022, voters will be able to choose a new member of the Water Replenishment District #3.

It is critical that you carefully read the labels each candidate has given themselves to encourage your vote.

1. John Allen, Retired Water Commissioner. Actually, Mr. Allen is not a retired water commissioner. It appears that he does not want voters to know he is on the WRD and has been since 2014. During this time the WRD was sued by several cities for illegal assessments and embroiled in internal problems concerning management and board members.

2. Mike Murchison, Water Infrastructure Advocate. Mr. Murchison makes his living as a full-time paid lobbyist and boasts on his consulting website that he is currently “working with Silverlakes ownership to identify state funds for a water infrastructure project.”

The choice for Water Replenishment District #3 is clear.
We need leadership that protects you, the ratepayer.

The Water Replenishment District (WRD) is the largest groundwater agency by population in the state of California, managing and protecting local groundwater resources for four million residents. WRD's service area covers a 420-square-mile region of southern Los Angeles County, the most populated county in the United States. The 43 cities in the service area, including a portion of the City of Los Angeles, and other unincorporated parts of LA County use about 220,000 acre-feet (72 billion gallons) of groundwater annually which accounts for nearly half of the region's water supply needs.

WRD ensures that a reliable supply of high-quality groundwater is available through replenishment with recycled water and stormwater capture. WRD is responsible for monitoring and testing groundwater throughout the region using effective management principles. In 2013 and 2014, WRD was appointed by the Court as the Watermaster Administrative Body for the Central and West Coast Basins. In this role, WRD is responsible for administering the terms of the legal judgments controlling pumping, water rights sales and leases, storage, and carry-over conversions.

Why is groundwater important? 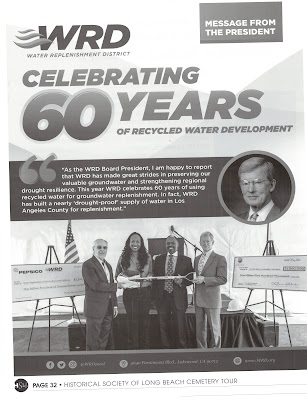 Gerrie Schipske, Water Ratepayer Advocate and candidate for the Water Replenishment District #3, today issued the following statement concerning the misuse of public funds by the Water Replenishment District. Schipske points out that the WRD purchased a full-page advertisement in the program booklet given out by the Historical Society of Long Beach during the recent Annual Cemetery Tour. The ad featured a portrait photo of John Allen and a group photograph that identified him as the “president” of WRD.

She issued the following statement:

“WRD is a public agency that assesses the water departments and agencies of local government. Those assessments are passed along to the water ratepayers. By law, the assessments are only to be used to provide water replenishment services. Instead, WRD has a long history of purchasing advertisements promoting its board members.

Less than nine days before the election, WRD placed a full-page advertisement in the program booklet distributed during the Historical Society of Long Beach’s Annual Cemetery Tour. The ad featured a portrait photo of the current candidate, John Allen, and a second photograph with Allen posing as President of the WRD. The ad is clearly a campaign advertisement for Allen.

Water ratepayers should not be paying for the campaign of any WRD member. Leading up to an election, the WRD which is a government agency should refrain from using public funds to pay for any advertisement which features any WRD elected officials.

The last time I checked, the water ratepayers of Long Beach have been continually assessed to pay WRD for its ‘pumping charges.’ This assessment has increased the monthly water bills Long Beach ratepayers are charged. These funds should not be used to pay for the publicity for its elected officials.”

Gerrie Schipske is an attorney and water ratepayer advocate
seeking election to District #3 of the Water Replenishment District. 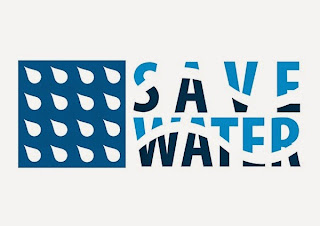 As a Water Ratepayer Advocate, Gerrie Schipske is concerned that in the past six years, the Water Replenishment District has been sued by the cities of Downey, Cerritos, Signal Hill, and Bellflower, for violating Proposition 218 procedural requirements when determining a rate for pumping groundwater.
Assessments must only be spent for “regional benefits, reduce reliance on imported water sources, or enhance water security in the basin.” The monies cannot be used for other purposes which the cities alleged the WRD was doing.
Consequently, the cities agreed to settle for $9.1 million dollars.
The WRD needs a water ratepayer advocate, like Gerrie Schipske, to make certain this does not happen again.
at 9:38 PM 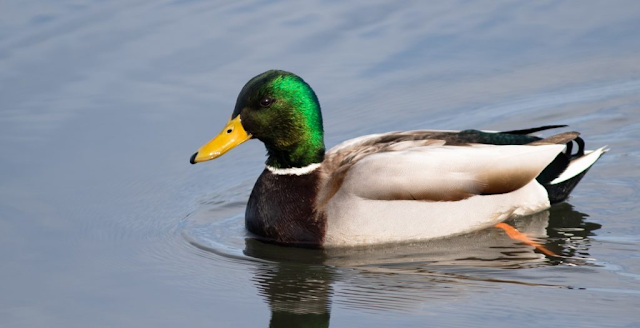 Gerrie Schipske, Water Ratepayer Advocate and candidate for the Water Replenishment District #3, today blasted WRD Director John Allen, who is running for re-election, for refusing to help Long Beach with a serious water issue created by the “duck pond” located in El Dorado Park West. Schipske represented the area containing the El Dorado duck pond for eight years as a member of the city council.

She issued the following statement.

“WRD is the largest ‘groundwater’ agency in California. The agency is supposed to be helping create groundwater catchment areas so that our city has a reliable source of drinking water as we face serious drought and water shortages.

“Last year, I contacted Mr. Allen about the duck pond near Willow which is badly in need of repair. The duck pond is actually a stormwater catchment and turned into a duck pond because people left ducks there and many wild ones flew in. The sidewalk surrounding it is badly broken. The pond gets filled with algae because it is not properly aerated and people throw bread into the water, creating bacteria. Also, the parking lot (when it rains) has oil run off which pollutes and the golf course sprays pesticide on the course which runs off into the pond.

When there has been raining, the pond, and surrounding park area flood and run off on to Willow Street. In the dry season, the city has to use water to water the surrounding park.

Structuring drainage combined with modified recharge wells can be used to catch water runoff. This modification of water catchment areas could make the duck pond area dry quickly after a rain so the activities of people are not bothered when utilizing the open space provided. Surface runoff water could be absorbed in an open aquifer so that the hydrological balance always be maintained. Adequacy groundwater in the area could be used to water the park and back up for clean water by creating wells and reservoir stocks.

I so informed Mr. Allen and asked if WRD could turn this pond into a groundwater catchment and reconfigure the surrounding area. The land on which El Dorado Park sits has a low water table and possibly could be dug down to let the natural water rise into a new pond. It floods when we have heavy rains. Just north of the duck pond is Willow Street which severely floods when it rains; somehow that water could be directed to the pond.

This could be a win-win for WRD and those of us who want that pond fixed with a sustainable solution. Mr. Allen responded that the duck pond is ‘LB’s problem.’

The last time I checked, the water ratepayers of Long Beach have been continually assessed to pay WRD for its ‘pumping charges.’ This assessment has increased the monthly water bills Long Beach ratepayers are charged. Developing a sustainable groundwater system in Long Beach is WRD’s problem and should have been funded.”

Gerrie Schipske is an attorney and water ratepayer advocate who is seeking election to District #3 of the Water Replenishment District.

Seismologists reflected today that had the 6.0 earthquake that hit Napa been pointed in the other direction, the energy would have destroyed the fragile levee network in the Delta allowing sea water to surge in and devastate the fresh water that Southern California so much depends upon. This potential crisis was discussed in the PPIC study in 2007 -- Click here

We need forward thinking water policy throughout the state. We need ethical decisions being made about construction projects to store and distribute water.

Help me bring open and transparent government to the Water Replenishment District. 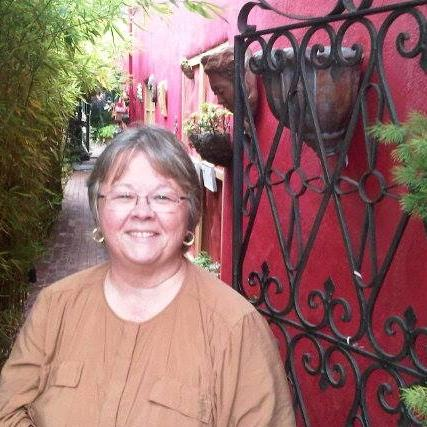 Former Long Beach City Councilwoman and attorney, Gerrie Schipske, is a proven champion for water ratepayers and open government. For the last five years, Gerrie Schipske has been standing up to the City of Long Beach who was taking water ratepayers’ money to spend on non-water expenditures. She recruited brave plaintiffs and assisted other attorneys who specialize in helping ratepayers. Together, they were able to stop an illegal pipeline fee that the city assessed and then passed along to ratepayers. They were able to stop the illegal 12% tax on water and forced the City to give the money back to the ratepayers.

Gerrie is one of only seven in the U.S. to be recognized by The White House as a "Champion of Change for Open Government". That's because she has the guts to ask the tough questions and to take the time to dig into the issues. When she gets the facts, she shares them with the public.

Gerrie Schipske served on the Long Beach City Council for eight years and was the strongest advocate for open, transparent, and accountable government. She authored the toughest lobbyist reform legislation that put a stop to gifts from lobbyists to elected officials and helped guide the passage of a law that requires lobbyists to publicly register in Long Beach. Councilwoman Schipske was the first elected official to post her calendar online so that the public would know with whom she met. During the budget process, she pushed for using online access so the public would weigh in on what cuts to services needed to be made. She was the only City Council member to vote against every tax increase measure proposed in Long Beach.

Gerrie Schipske taught graduate and undergraduate courses at California State University at Long Beach for over 11 years in the areas of organizational behavior, human resources management, and municipal and health care law. Most recently she served as a healthcare access attorney, advocating for patient rights.

Gerrie Schipske was born in Long Beach, and spent her early years in Lakewood where her parents helped start St. Pancratius Parish. Gerrie returned to Long Beach in 1977. In 1992, she was elected to represent the cities of Lakewood, Signal Hill, Avalon, and Long Beach on the Long Beach Community College Board of Trustees.

As a Water Ratepayer Advocate, Gerrie Schipske is concerned that in the past six years, the Water Replenishment District has been sued by the cities of Downey, Cerritos, Signal Hill, and Bellflower, for violating Proposition 218 procedural requirements when determining a rate for pumping groundwater.
Assessments must only be spent for “regional benefits, reduce reliance on imported water sources, or enhance water security in the basin.” The monies cannot be used for other purposes which the cities alleged the WRD was doing.
Consequently, the cities agreed to settle for $9.1 million dollars.
The WRD needs a water ratepayer advocate, like Gerrie Schipske, to make certain this does not happen again.